My pool will not hold chlorine. Why?

Have you ever tested no free chlorine in your pool, even after shocking? Some pools struggle to hold free chlorine, but there are many possible reasons why.

It is possible to test zero chlorine in a pool after shocking. It's also common for a pool to not be able to hold a chlorine reading for a week.  But there could be several different things going on, so let's touch on them:

We can break all of these possibilities into two categories: a testing issue, and an actual chlorine demand issue.

If you just shocked your pool, it should have a very high chlorine level for the first several hours (at least). Sometimes when you test chlorine within those few hours, the chlorine is so high that it actually 'bleaches out' the test result. In other words, it overpowers the DPD chlorine test and appears to be zero.

This is a false reading.

To fix this, dilute the water sample 10:1 with bottled drinking water, and test again. If you have zero again, then you probably actually have zero chlorine.  If it shows color and even a slight chlorine reading, you know it was a testing issue, and your pool actually does have chlorine in it.

But let's say you did the dilution and the test still shows zero chlorine. The question then becomes where is the chlorine going? 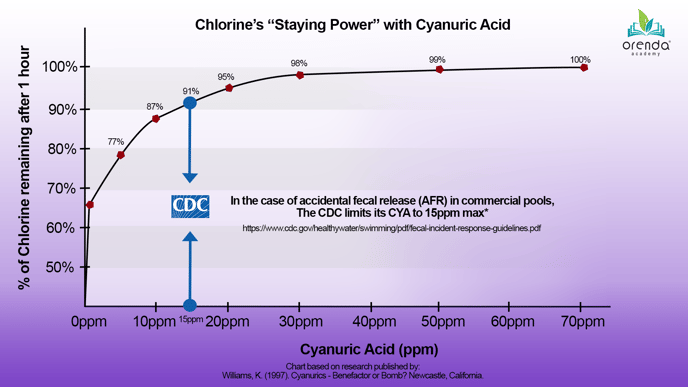 If you have any CYA at all, UV degradation becomes much less of a concern. At 30 ppm CYA, you should still have 98% of your chlorine after one hour. Not bad, considering you would have only half of your chlorine in 45 minutes without any CYA. We recommend less than 50 ppm CYA in swimming pools.

Contaminants also reduce the amount of chlorine in your water. If you test zero chlorine within a few hours (or even a day or two) of shocking–and it was an accurate test–you most likely have a high chlorine demand.

Living contaminants are the sanitizer demand (algae, bacteria, other microorganisms).

Sanitization and disinfection are simply a race between the killing speed of the sanitizer (chlorine, usually) and the reproduction speed of the contaminant. Germs and viruses are very easy for chlorine to kill and stay ahead of. But algae is a much more persistent problem that can reproduce quickly and take over a pool.

Unless it's an algae bloom getting out of control, usually the sanitizer demand is a small percentage of chlorine demand as a whole. While chlorine is primarily designed to kill, the vast majority of chlorine's actual work in pools is oxidizing non-living contaminants.

There are three categories of oxidants: metals, nitrogen compounds, and non-living organics.

Metals are the first thing chlorine will oxidize because they take the least amount of energy. Nitrogen compounds and organics take more chlorine to oxidize, depending on the complexity of the molecule.

In any event, if you cannot hold chlorine, consider supplementing chlorine against the oxidant demand, which is our Second Pillar of Proactive Pool Care.

Some chemicals added to water can conflict with chlorine. Our SC-1000 purge dose is included in this. But aside from the purge dose, SC-1000 is compatible with chlorine long-term.

The more common conflicts are with algaecides.

Sodium bromide is a bromine product that will conflict with chlorine. Chlorine and sunlight will interact with sodium bromide and leave behind harmful bromates in the water. Not only will the product reduce chlorine levels over time, but bromates are "classified as an EU CLP 1B carcinogen" according to the NIH website.

Ammonia-based algaecides conflict with chlorine because they are nitrogen compounds that chlorine eventually must combine with to remove (combined chlorine). Look for anything with the word "ammonia" or "ammonium" in the ingredients on the label. Quat products also are ammonia (quaternary ammonia).

Copper sulfate leaves behind copper, which will eventually be oxidized by chlorine.

Free chlorine is the best algaecide. As far as we know, every other secondary algaecide will eventually conflict with chlorine in one way or another.

In short, if your pool cannot hold chlorine, especially within hours of shocking, first look at the test kit itself. Dilute the sample 10:1 and try again.

If it truly is a zero chlorine reading, then ask where is the chlorine going? What is it fighting? What is reducing it? Those questions lead to sunlight degradation and chlorine demand.

If you have CYA in your water, you can rule out sunlight degradation as the main culprit, though it may be a small contributor at low CYA levels.

If you test a true zero chlorine reading and you have some CYA in your pool, we recommend supplementing chlorine, because something in your water is overpowering your chlorine.