What is filter channeling?

Sometimes water does not evenly flow through a sand filter, and it creates channels for faster flow, but less filtration.

Filter channeling is when gaps (or channels) are created by water flowing through the filter and bypassing the media. Another way to think about channeling is that water finds the path of least resistance. Water forces its way through any weaknesses in the sand bed, which eventually open up into tunnel-like channels for water to easily flow through. 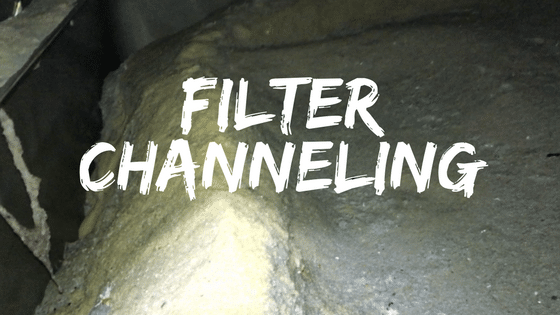 The problem with channeling is the water is bypassing the filter media, so it's not getting screened the way it should. Water found an easier way to slip through (or around) the sand and continue on its way.

In our experience, the most common cause of filter channeling is fouling of the sand (or crushed glass media). Fouling is usually caused by non-living organics sticking to everything, but it also can involve calcification if the LSI of the water is too high. Calcification is most common in pools that feed cal hypo as their primary chlorine.

When such fouling or calcification occurs, the top layers of sand become clumped together. Therefore, it is more difficult for water to penetrate evenly into the sand bed. So water is forced to find the path of least resistance–any weakness in the sand bed–and push. Over time, channels can develop.

Sometimes channels can be created in the middle of the sand bed, but most often they are around the edge of the filter bed.

When we purge sand filters, we often see evidence of channeling around the edges of the sand bed. Specifically, you'll see ridges, as shown in the photo above. A perimeter ridge like that indicates that water blows around the sand instead of pushing through it.  The ridge is formed during backwashing cycles when water reverses direction to clean the filter out.

Rather than flowing up through the sand (like it's supposed to), it will use those same edge channels, flow around the sand, and out the top. This process creates the ridges.

How to fix a filter channeling issue

The best way we know of to fix a channeling issue is to open the filter up, address whatever is fouling the sand, then stir the sand up again to reset the sand bed. This is all done in our sand filter purging procedure.