Many factors can cause cloudy water, or a combination of them.

Without seeing the pool and testing its water chemistry, it's impossible for anyone to know exactly what is causing a pool to be cloudy, or "turbid". There are many reasons water can become cloudy, so let's discuss some of them.

Before listing this, it's important to distinguish different types of cloudiness (or "turbidity"). Just to name a few (though there could be more):

We often find a combination of issues when people show us cloudy water. But notice we did not mention Total Dissolved Solids (TDS). Most people seem to think TDS is the main reason for cloudy water, but we disagree. Dissolved solids means they are invisible and not contributing to water clarity issues. Suspended solids are what we are looking for here...solids that are not in solution, but still in the water and visible to the eye. 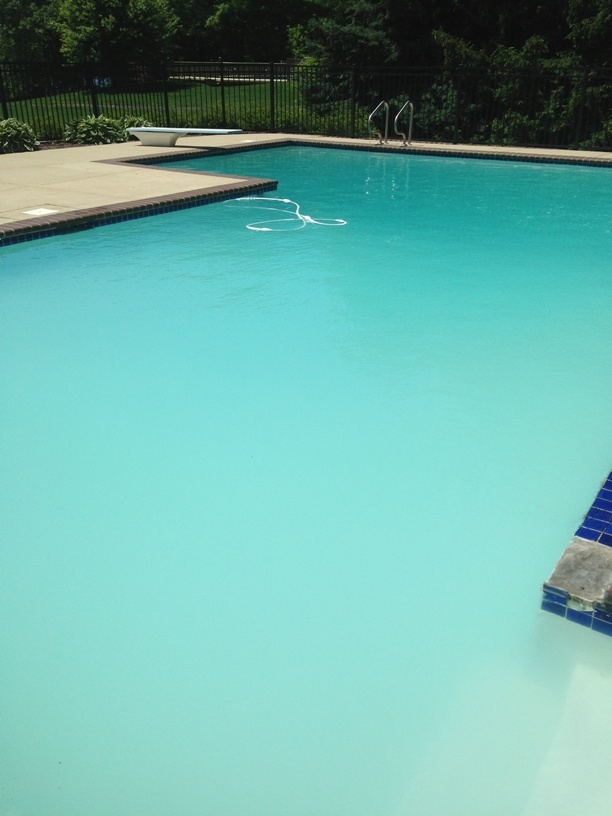 Carbonate clouding is a high-LSI violation. The water clouds because calcium carbonate is precipitating out of solution due to a high LSI over +0.30. We most often see this in spas when the heater is turned up, or in pools that have just recently added sodium bicarb or soda ash.  Soda ash, in particular, is notorious for clouding pools because it basically introduces pure carbonate ions (CO3--), which will immediately bind to available calcium (Ca++) ions in the water to create calcium carbonate (CaCO3).

Carbonate clouding looks white or gray, but never brown/yellow/green or any other color. Calcium carbonate is pure white in color. Eventually this cloudiness can be redissolved in water (if the LSI is corrected or pH is lowered enough), filtered out, or it will fall to the floor as fine white dust. This dust looks like plaster dust, but it will only be on the floor of the pool, not the walls. 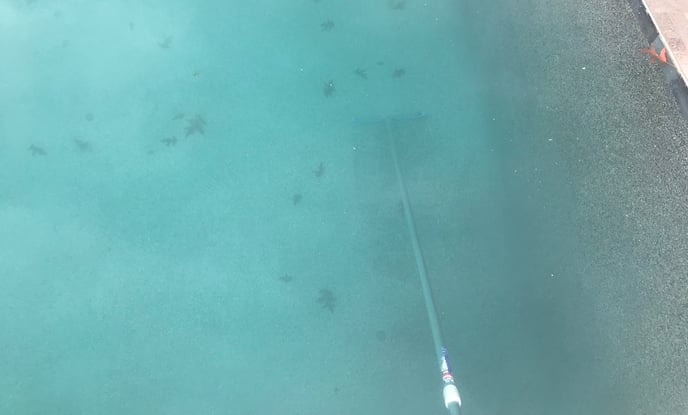 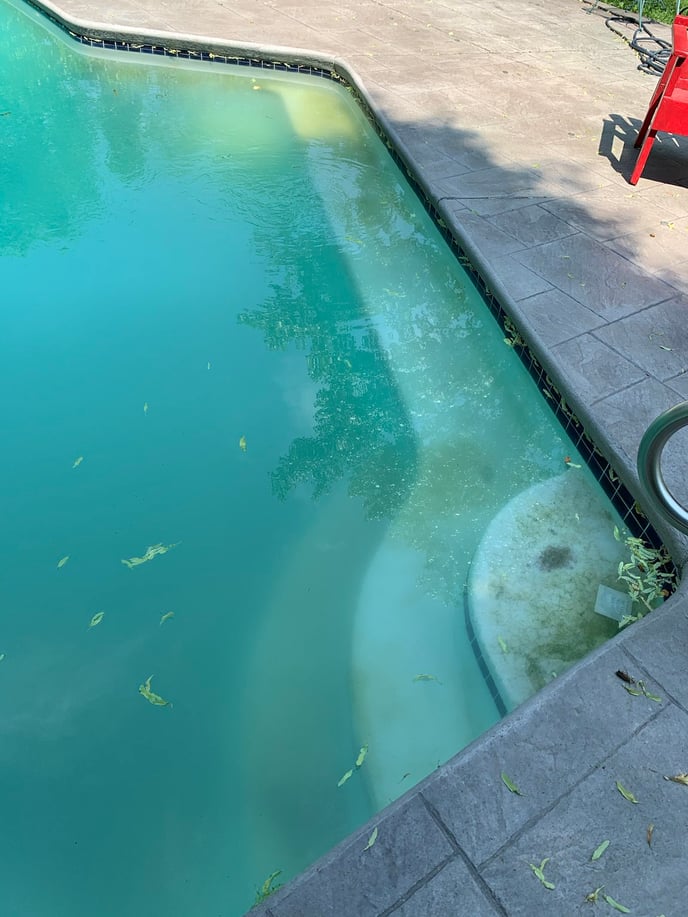 Algae are plant-like microorganisms that we most often see on pool surfaces that do not get brushed often. But with enough time, algae can reproduce enough that they begin to cloud the water. Reproducing algae greatly increase the sanitizer demand on chlorine, and often leads to a zero chlorine reading in a matter of days (or even hours).

When the killing rate of chlorine is exceeded by the reproduction rate of algae, an outbreak will occur, and it can cloud the water. Such clouds will look green, yellow, or brown in color. Usually, it's a shade of green.

Before shocking the pool with chlorine on the assumption your pool is turning green from algae, diagnose it first by doing the white bucket test. It's better to be safe than sorry.

Dirt and debris are constantly introduced to the pool from the environment around it, and bathers jumping into it. Some of these contaminants will float on the surface–like pollen–while most dirt is heavy enough to sink. But then again, a lot of small particles are not quite heavy enough to sink, and need some help to reach the filter. Think about it: have you ever opened your skimmer lid and seen particles floating at the top (or sticking to the rim at the water level) but not being pulled down into the filtration system?  If you have an outdoor skimmer pool, the answer should be yes. 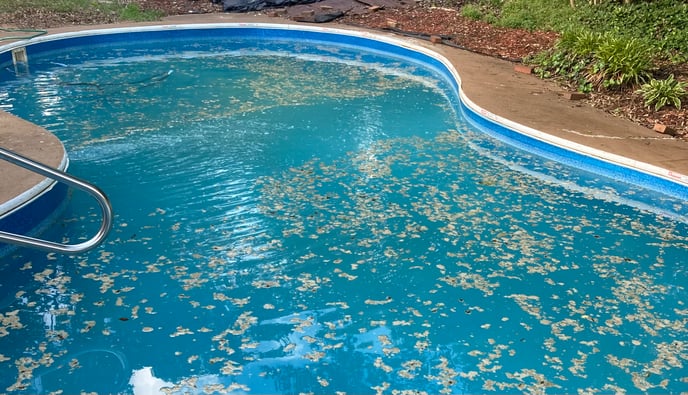 Sometimes dirt needs to be coagulated with other dirt so it can sink. If the dirt sinks, it can be either vacuumed, pulled through the main drain or skimmer, and filtered out. In any event, when dirt and debris stay floating, they're hard to remove, because they either stick to the tile line or inside the skimmer housing. That would be fine, except the nets used in the industry to clean surface debris are often unable to capture such fine dust and debris (like pollen).

But lets say the dirt is heavy enough to sink on its own. Great! But what happens when it's sinking and gets stuck to non-living organics in the water that are trying to float? We see this often in heavily-loaded pools (with bathers using sunscreen, lotions, and other body products). Oils and organics will suspend dirt particles because they're trying to float while the dirt is weighing them down. The result is cloudy water.

To help with particles, consider a clarifier like CE-Clarifier.

Bather waste. Body butter. Sunscreen, lotions, cosmetics and whatever else we put on ourselves before (or during) a day at the pool. This stuff comes off our skin and stays in the water, and it can easily overwhelm chlorine. Non-living organics are, by far, the largest contributor to the oxidant demand in swimming pools. 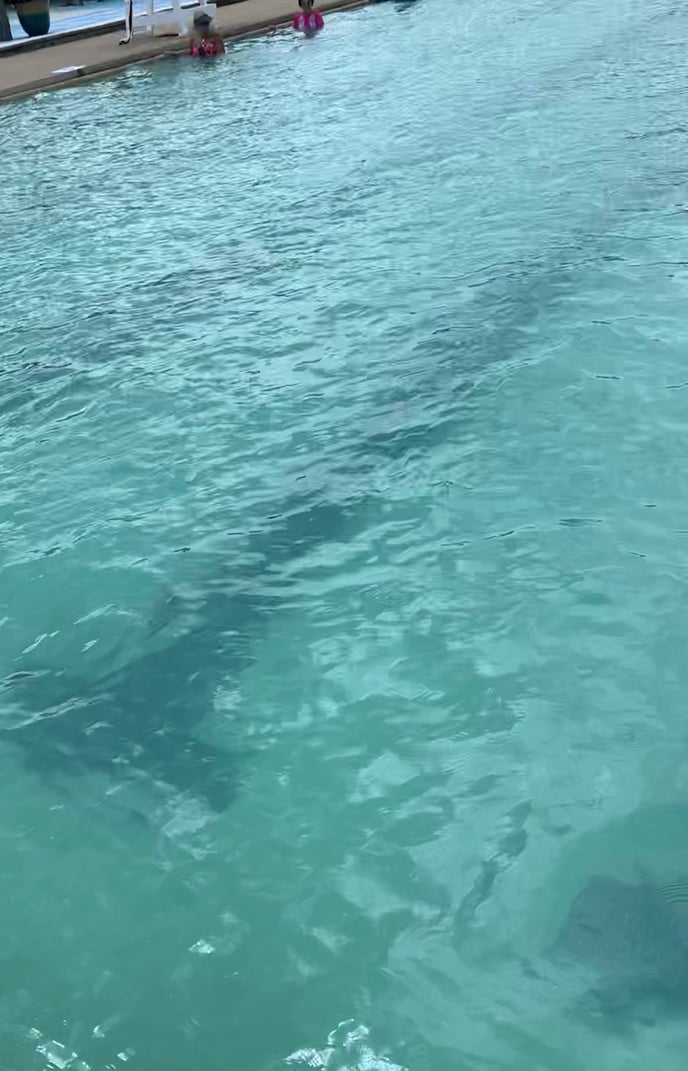 Chlorine is not made to remove oxidants, though it will try. And it's one thing for chlorine to oxidize natural organics like tannins or human sweat. It's entirely different for chlorine to have to oxidize synthetic compounds like sunscreen and cosmetics.

To address non-living organics, our recommendation is to use enzymes like CV-600 or CV-700. Enzymes break down and remove non-living organics so they do not overwhelm chlorine. We often do not even know what is lurking in our water until we purge with enzymes. The photo above is a pool we purged, and below is a screenshot of that same pool within the first few hours of purging with CV-600: 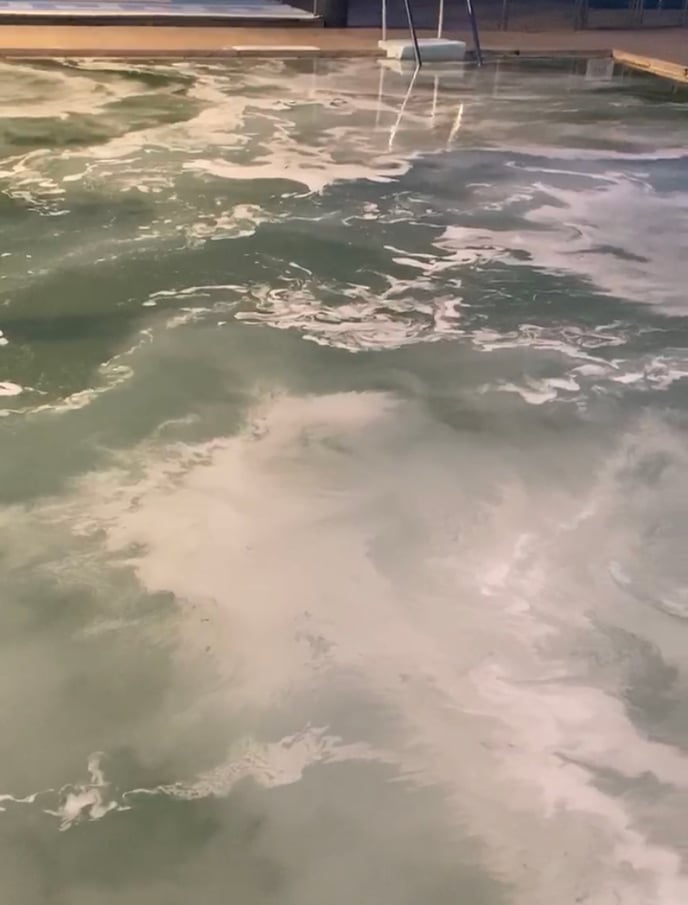 This screenshot shows bubbles as the enzymes convert the carbon-based organic waste in the water into carbon dioxide (CO2). Better out than in.

Here's another pool 24 hours apart, showing what enzymes can do for water clarity:

PR-10,000 clouds up the water as part of its process for removing phosphates. And until that dust cloud is filtered out or settles to the bottom for vacuuming, the water will remain cloudy.

If non-living organics are in the water, it can take longer for the water to clear. This is for the same reason mentioned earlier about dust and debris: oils float and debris sinks. Remove the oils, and the dust will fall and be filtered out faster.

When filters aren't able to screen particles, turbidity (cloudiness) becomes an issue. This is generally due to a filter problem like channeling, a torn cartridge, or a broken D.E. grid. When filters are working right, their screening abilities are quite remarkable. 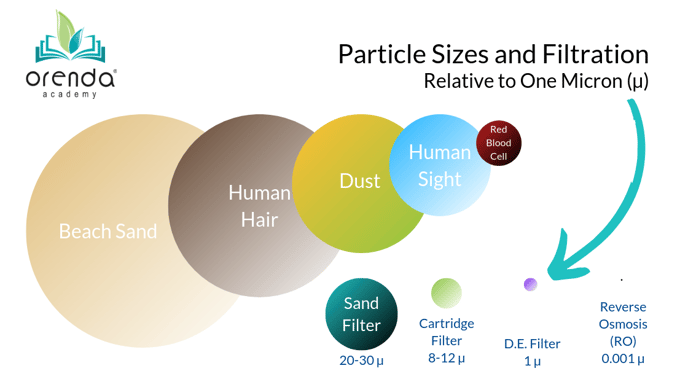 The other thing to consider about filtration systems is that they are at the mercy of circulation. Remember the holy trinity of water quality: circulation, filtration, and chemistry.  They are all interdependent on each other. So if you have dead spots in the pool, or the circulation system is undersized, the filter can only do so much.

Cloudy water can occur for any number of reasons. And they can either be solved chemically (carbonate clouding, oils and organics, algae blooms) or mechanically (phosphate remover dust, filter issues, dirt, and debris). But if you have good circulation, filtration, and chemistry, cloudy water will rarely occur.