Why are the LSI and dosing results different in the Orenda Calculator™ compared to other apps?

Most pool chemistry calculators are built upon dosing charts. The Orenda Calculator™ is more precise.

The main reason the Orenda Calculator™ gives different results (for LSI and chemical doses) is because of the depth and precision of our formulas.

Most pool chemistry calculators are built upon dosing charts. So was ours, until we released Orenda 3.0. Now the Orenda Calculator™ uses a robust set of formulas that account for things like chemical densities, and are accurate to six decimal places (i.e. 0.123456). We then round that six-decimal value down to two decimals and display it on the screen.

Let's start with the Langelier Saturation Index (LSI). The LSI was not originally formulated for swimming pools; it was created for closed-water boiler systems.

The LSI as then adapted to other applications, including swimming pools. It was simplified several times so that it could be used in pools. Here is the standard LSI factors table.  These values are widely available online on many different websites:

The issue with this chart is that its an adapted, simplified version of the original formula. It's generally considered "close enough", and we agree with that...but we also insisted upon having the most accurate LSI calculator in the world. So "close enough" was not enough for us.

Furthermore, not all chemicals are the same density. So when measuring by weight or by volume, there are differences that most charts do not even mention. We didn't even realize this ourselves, as our app used to use dosing charts and extrapolated between factors (just like we did with LSI). And it was close, but not precise.

Now, we factor in the density, weight and volume of the exact chemicals prescribed. We also factor in other chemistries in the water that will change how much a given chemical will affect the water.

Without boring you with the details, just know that the LSI and chemical dosing results you see in the Orenda Calculator™ today are the most precise we know how to make them. And you will see slight differences when comparing our app to others (or even our old app prior to version 3.0). 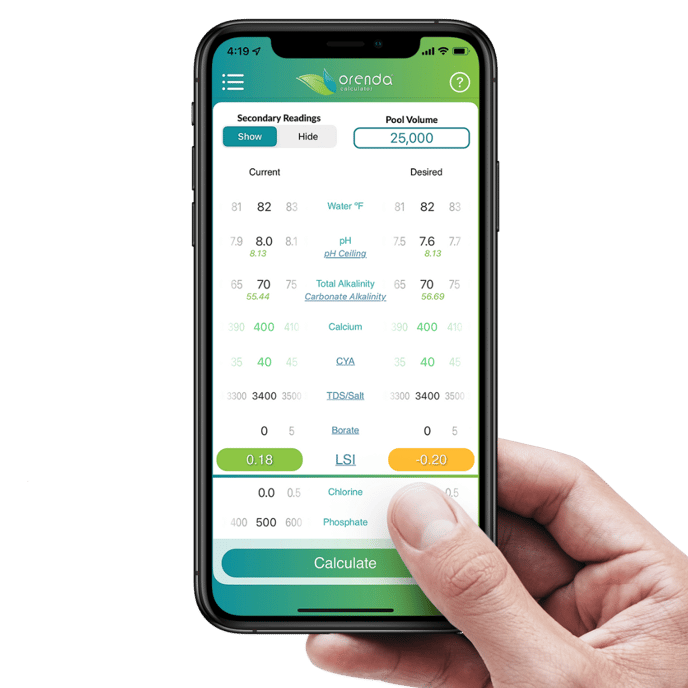